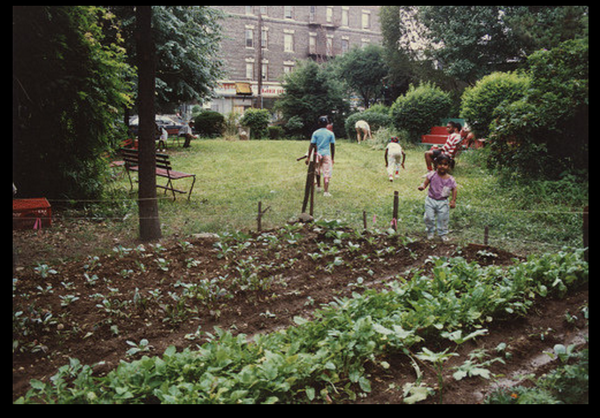 1100 Bergen Community garden, owned by its block association for decades, was at risk of having tax debt sold to an investor-backed trust when an administrator failed to file the annual property tax exemption renewal. We worked with gardeners and Mohen & Segal LLP to transfer the land to the Brooklyn Queens Land Trust to protect it from foreclosure and auction to the highest bidder.

Background: Each year, NYC’s Department of Finance sells tax debt owed to NYC to private investors. It regularly includes properties owned by not-for-profit corporations, which are held by them in service of their missions, whether the provision of community services, like day cares and community gardens, or affordable housing. Although State law says that non-profits are exempt from paying property taxes, lack of information means that many community properties are regularly included in the sale. This often leads to foreclosure on non-profit-owned properties which then become private properties. In 2017, this put 536 nonprofit-owned place in jeopardy. Read more about the issue here.

The Policy Solution: In response to collective advocacy, Intro 0245-2018 was introduced by Council Member Antonio Reynoso on January 31, 2018, which will exempt non-profit properties from the tax lien sale list. (Council Member Reynoso first introduced it in spring 2017 as Intro 1656-2017, but it had to be reintroduced for a new legislative calendar session.) The bill automatically exempts community properties from the Department of Finance tax lien sale. Read it here.

You Can Help Get this Bill Passed!

CALL YOUR REPRESENTATIVES. Look them up here.

Council Members who endorsed the bill when it was introduced in the 2017 legislative session need to be reminded to re-endorse the new 2018 version of the same bill:

Here’s what you can say when you call the above representatives:

Thank you Council Member _____ for endorsing Intro 1656-2017, which will exempt community properties from the Department of Finance tax lien sale! I am calling to ask you to please endorse Intro 0245-2018, the exact same bill for the new legislative session. Also, I encourage you to please bring it to a public hearing and vote ASAP. Last year, 536 places, primarily houses of worship and community centers, were caught in the sale. Let’s make sure this doesn’t happen in 2018! Thanks so much for protecting the places New Yorkers need in our neighborhoods!

Council Members not listed didn’t endorse last year’s bill, but can totally still be encouraged! We already know the folks who signed this letter support it. Here’s what you can say when  you call:

I am calling to urge Council Member ____ to endorse Intro 0245-2018, which will exempt community properties from the Department of Finance tax lien sale. Last year, 536 non-profits that house arts organizations, food pantries, houses of worship, community gardens, and more almost had their debt sold to private investors because of lack of information and bureaucratic speedbumps, putting places and the people who run them at serious risk. Let’s make sure this doesn’t happen in 2018! Thank you!

Borough Presidents can also take a stand, or be thanked for their advocacy!

If you live in Brooklyn, call and thank Borough President Eric Adams for speaking up! If your live in another borough, call your Pres and ask them to request DOF remove nonprofit-owned properties and vacant lots from the 2017 tax lien sale. Find their numbers here.

“Simply put, houses of worship and non-profits should not be caught in the same tax lien sale net as other properties. At a time when underserved communities find themselves relying on charitable organizations more and more, with those organizations stretched thinner and thinner, we should making a greater effort to help the helpers.” — Brooklyn Borough President Eric Adams, May 8, 2017.

Thank the Public Advocate at (212) 669-7200 for championing protecting our nonprofit-owned properties from the tax lien sale, and ask her to please continue by endorsing the new version of the legislation in 2018.

“Our charitable institutions and houses of worship are exempt from property taxes and should not be put at risk of foreclosure at the hands of a private bank because of paperwork errors and administrative inefficiencies. Yet, tax liens on over 300 properties owned by non-profits, many of which are houses of worship, are set to be sold in this week’s tax lien sale. In the current financial climate, many of these buildings may wind up in foreclosure or forced into a quick sale. I’m calling for the City to remove all tax-exempt non-profits from the impending tax lien sale, and place each property into HPD’s Landlord Ambassador Program. We must be vigilant about protecting those organizations on the front lines in our communities.” — Public Advocate Letitia James, May 11, 2017

And spread the word! Share this page or any of the news articles about the issue listed here. Tag the Mayor on social media and ask him to protect our community properties and neighborhoods from the tax lien sale by removing tax-exempt properties and vacant lots! Help protect places that were included in previous sales from foreclosure by speculators here.

2. Help Pass the Housing Not Warehousing Act (almost there!)

357 Beach 70th Street, Rockaway, which has been vacant for years. Unpaid property taxes were sold in the 2015 and 2016 tax lien sales. By selling the debt, the City gives up all leverage over the property.

596 Acres would like you and your garden group, block association, business, club or organization to join us in endorsing the Housing Not Warehousing Act, which will add transparency and accountability to vacant public and private property in our neighborhoods in three key ways. It will:

Just one more bill to go: let’s pass Intro 1034! Endorse the act with us by encouraging your elected council member to endorse the bill, and thanking them if they already do. Find out how here.

Read about the Act and why its crucial in these testimonies before City Council’s Committee on Housing and Buildings from September 2016. See a photo of two out of three of the bills being signed into law by the Mayor of NYC in January 2018 here. Read about it in the press here.

Here are the four changes we have been advocating for, to protect places from the tax lien sale, for the past few years:

Find out more about the impact of the tax lien sale on community property here.

In 2017, We Successfully Supported A Law Requiring NYC Government to Keep It’s Own Version of URBANREVIEWER.ORG

Urban Renewal Area planning has left acres of abandoned city-owned lots in NYC’s neighborhoods that had already suffered decades of disinvestment caused by legally-instituted racism. In 2012, we created urbanreviewer.org to holding the city accountable to its abandoned Urban Renewal Area Plans and make sure people who lived in and near them would have the information they needed to design and advocate for the future of their top-down blighted neighborhoods. In 2017, our elected advocates introduced legislation that would make the government do the same. In June, we testified before City Council about this legislation (our testimonies are here). Intro 1533-2017, requiring the Department of Housing Preservation and Development (HPD) to keep relevant community boards, borough presidents, and council members updated about the status of urban renewal plans, passed in December! Read about it in the press here.

In 2016, We Successfully Supported People Power Over Properties with Deed Restrictions Placed on Behalf of Us New Yorkers

127 West 138th Street in Harlem, which is used as an open space and lawn by neighbors, is restricted to community facility use by a deed restriction that was placed on the date of the property purchase by a developer at auction from the City for a reduced price.

In September, we testified before City Council, asking for much stronger rules governing the City lifting deed restrictions than were introduced by members at the time (read that here).

Following the hearing, the weak bill that was its subject, Intro 1182, was significantly expanded, reflecting many of our requests.  The new policy concerning the modification and removal of deed restrictions includes the following:

Read about the passing of that legislation here.