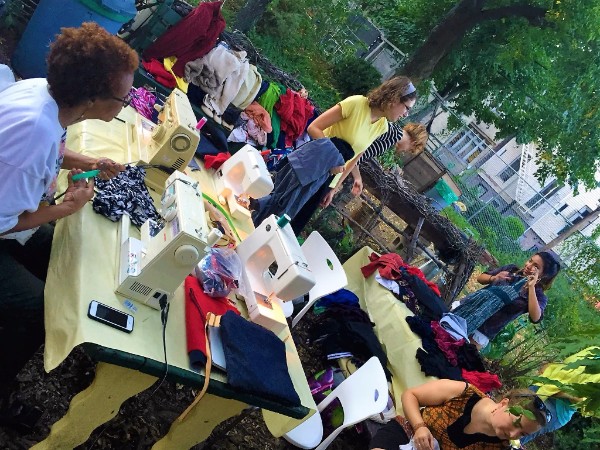 When neighbors organize to create and preserve NYC’s community spaces, they’re creating the potential for so much more to take place. On Monday evening, 1100 Bergen Street Community Garden in Crown Heights held Sew WHAT in the Garden – a clothing swap and sewing circle hosted by the Sewing Science Society of Brooklyn. Neighbors new and old came together to exchange clothing, style, sewing techniques, stories, and more. 1100 Bergen Street Community Garden is one of Brooklyn’s oldest! Last year, 596 Acres worked with its gardeners to facilitate the land being transferred from the Block Association that created it to the Brooklyn Queens Land Trust, a stable steward that will ensure the park is here serving the community in perpetuity (read more here). Save the date for the next Sew WHAT in the Garden! Sunday, September 25, 2pm to 6pm, 1107 Bergen Street,Crown Heights, Brooklyn.

You can support community land access for the long haul by making a tax-deductible donation to 596 Acres.

WORK WITH US
We’re hiring a Community Land Access Program Organizer. Each community land access campaign is slightly different, so we are looking for a self-driven problem-solver. You will continue our tested effective strategies to facilitate neighborhood groups accessing vacant land and, where needed, develop and pursue new ones.

The deadline to apply for Data Internships is tomorrow, Friday, September 2 at 5:59pm! You will learn intimately how to sleuth online for information about building transactions, city dispositions, the tax lien sale and warehoused public buildings.

NEWS FROM THE ORGANIZING ACRES
Staten Island – Great news! We got confirmation this week that the vacant land between Sand Lane and Piave Avenue is in the process of being transferred to the NYC Parks Department! This is a victory from a neighborhood campaign that got started in May 2014. Sign up to Organize here to be part of creating this new community space: http://livinglotsnyc.org/lot/58252/

Crown Heights, Brooklyn – Your neighbors have begun a proposal to create a community gardenon a former Lots for Tots lot on Prospect Place between Albany and Kingston Aves. This Wednesday evening, neighbors met and planned next steps: finishing their proposal and approaching Brooklyn Community Board 8’s Parks Committee on Tuesday, September 6 at 6pm at St. John’s Recreation Center, 1251 Prospect Place (between Troy and Schenectady Avenues). Meet them there! Or plug in by contacting Mandy at kordalknitwear@gmaill.com, (513) 317-4457. Sign up to Organize here: http://livinglotsnyc.org/lot/59081/

East New York, Brooklyn – Auradis grew up near these vacant lots on Hinsdale Street between Sutter and Blake, and recalls that they have been vacant since her grandmother’s day! She wants to transform them into a community garden with her youth non-profit, BROKE Youth (which stands for Be Responsible, Keep Excelling). Next steps: come up with a plan for the space. Join them: email Auradis at brokeyouthorg@gmail.com or call her at (516) 582-1460. Read notes and sign up to Organize here: http://livinglotsnyc.org/lot/59162/

Bed-Stuy, Brooklyn – Sandra and a group of neighborhood parents, some of whom are retired, want to put plants in the ground on the fenced-off vacant lot at 37 Rochester Ave between Atlantic Ave and Herkimer St. These lots were planned as as “Open Space (Park & Playground)” in the Central Brooklyn Urban Renewal Plan in 1968, and neighbors have been waiting ever since. Next steps: Sandra is going to call a meeting after the holiday weekend, and her group will come up with a plan! Contact Sandra to get involved: (347) 226-1643 or sandra.conner293@gmail.com. Sign up to Organize here: http://livinglotsnyc.org/lot/58273/

Bedstuy/Crown Heights, Brooklyn – Shadel and neighbors push forward on their plan for transforming a vacant lot at Malcolm X Blvd and Chauncey Street into a poetry garden. They are planning to meet in the next week. For updates, be sure to sign up to Organize here: http://livinglotsnyc.org/lot/3016860048/

Weeksville, Brooklyn – Youth organizer Cyeann is teaming up with D.U.E.C.E.S. to reimagine the vacant lot at 45 Somers near Rockaway Ave. It was formerly used as Lots for Tots lot, was planned as “Open Space” by NYC, and has great potential to become a community resource. Join Cyeann’s team of volunteers: Cedward268@gmail.com, (917) 202-1977. Sign up to Organize here: http://livinglotsnyc.org/lot/3015380043/

Rockaway Beach, Queens – Coming soon: Beach 84th Street Community Garden! Last weekend, neighbors got together to work on the proposal the NYC Parks Department is waiting for so that they can approve the transfer of this City property to the GreenThumb program (photo here). The garden will include raised beds, native salt-water tolerant plants, solar panels, and a community gathering area! Get involved by contacting Wanda at wandaone@optonline.net or Claudia at claudiaste@aol.com, (917) 848-1082. Sign up to Organize here: http://livinglotsnyc.org/lot/58968/

Rockaway Beach, Queens – Travis has envisioned this lot in the inventory of DCAS at Beach 84th Street as a compost site to create healthy growing medium for Rockaway’s gardens. Contact him at t.andersoncap@gmail.com or (646) 662-0585. Sign up to Organize here: http://livinglotsnyc.org/lot/4161030076/.

LOTS WITH ACCESS
West Harlem, Manhattan – Next Saturday, September 10 from 10:30am to 12pm at Electric Ladybug Garden at 237 W 111th street between Frederick Douglass and Adam Clayton Powell Jr., kids can learn about the solar system – from other kids! Get a rollicking musical introduction to the workings of our solar system in an ‘unplugged’ performance by students from Jose Barbose PS112! Afterwards, kids create their own solar system hats to wear home.

Bedstuy, Brooklyn – 462 Halsey Community Garden, on Halsey and Lewis, invites you to join them next Saturday, September 10 from 12pm to 3pm for fall planting, needs your help with their composting program every Thursday, Saturday and Sunday mid-morning, and has a sliding-scale community farmer’s market every Saturday! Find out more information about all of this on their facebook page, or visit their website, 462halsey.com, where you can sign up for their email list.

Flatbush, Brooklyn – Q Gardens, right by the Q train on Church Ave and East 18th Street, has hit an exciting milestone: Between April 2015 and July 2016, their community composting operation diverted 10 TONS of food scraps from landfills! They are always in need of more compost volunteers; learn more at: https://qgardens.org/places-to-drop-off-your-compost/ or contact Natalia, our sent-from-heaven Composting Coordinator, at nataliajsucre@gmail.com

JOBS AND OPPORTUNITIES
City Harvest, a non-profit food rescue organization, seeks full-time AmeriCorps member with strong communication and organizational skills to join an upbeat Nutrition Education Department. The Cooking Matters AmeriCorps member is being sought for a term of service starting no later than September 15, 2016 and ending approximately 1 year from start date, but will keep the position open until it’s filled. More information and application here.

Last weekend, Paula Z. Segal of 596 Acres and Murray Cox Documentary Photographer stopped by Electric Ladybug Garden as part of GreenThumb’s 11th Annual Great Harlem Community Garden Tour. They enjoyed a children’s concert in the garden and snapped this photo from above. This site went from from a decades-old vacant, fenced-off lot to permanent NYC Parks Department community garden through incredible local organizing facilitated by 596 Acres! Now, look at all that growing. 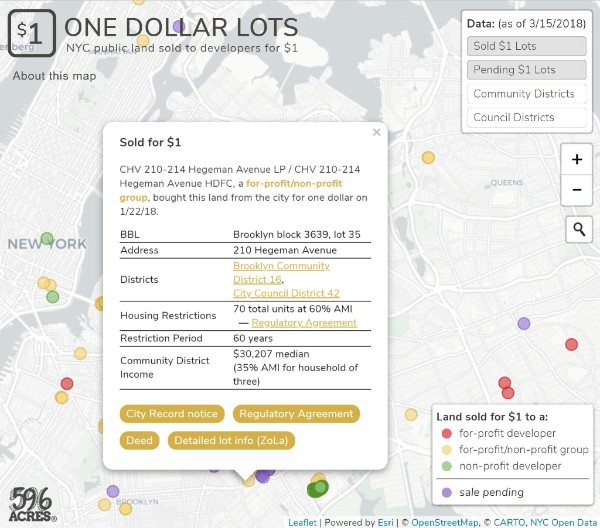 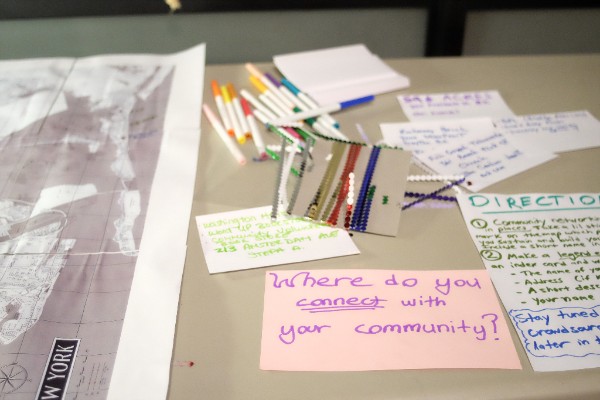