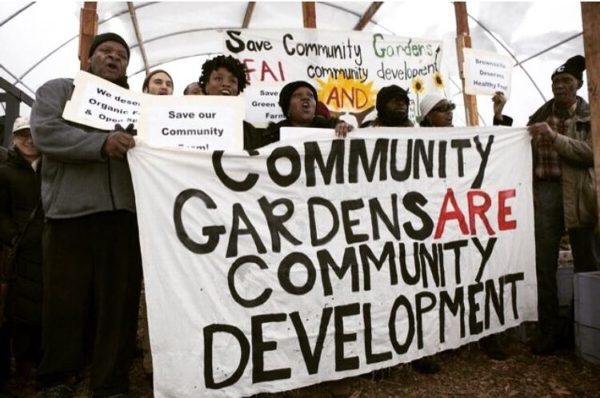 Community land stewards from across the boroughs will present their land access struggles and successes. You will learn about farms and gardens that *need our help now* and those that have been ~recently permanently preserved~ via land trusts or conveyance to the NYC Parks Department from their stewards.

This session is organized and facilitated by 596 Acres, NYC’s Community Land Access Advocates. 596 Acres has facilitated the creation of 39 new and community growing spaces in NYC since 2011. It played a key role in the the preservation of dozens of others and is actively involved in current campaigns to transform vacant public land into community resources, to build long-promised public open spaces, to defend gardens owned by not for profit organizations from tax lien foreclosure and to preserve community spaces in the face of deed theft.

Rene Calvo, steward of *Mandela Garden* (http://livinglotsnyc.org/lot/58229/)
W 126th Street near Frederick Douglass in West Harlem, Manhattan
This garden is in danger of disappearing: the city agency with jurisdiction over the land, NYC Housing Preservation and Development (HPD), offered it to developers to build housing in December 2015, part of the Mayor’s housing plan. The lot was abandoned by the city for 3 decades until neighbors organized a successful campaign for access three years ago, heroically de-paving the lot by hand and transforming it into a community wildflower oasis.

Christine Johnson, steward of *Pleasant Village Community Garden* (http://livinglotsnyc.org/lot/57797/)
Pleasant Ave between East 118th and East 119th Streets in El Barrio/East Harlem, Manhattan
This garden is in danger of shrinking: two of its three lots were among 18 active gardens on a list of sites that the New York City Housing Preservation and Development (HPD) announced in January 2015 that they were willing to sell to developers for $1 each. HPD wants to “move” it. This community green space has been serving the community since neighbors made it out of abandoned land 40 years ago.

Jeannine Kiely, steward of *Elizabeth Street Garden* (http://livinglotsnyc.org/lot/1004930030/)
Elizabeth Street between Spring and Prince Sts, Little Italy
This garden is in danger of disappearing: it is on City land and gardeners are advocating to stay in the face of proposals to build a large housing development on the same site. The site was transformed from a derelict lot into a garden in 1991 when Elizabeth Street Gallery leased the site from the New York City Department of Citywide Administrative Services.

Barbara Adamson, steward of ~Green Valley Community Farm~ (livinglotsnyc.org/lot/58882/)
New Lots Ave and Sackman Street in Brownsville, Brooklyn
This garden is no longer in danger of disappearing: It was among 18 active gardens on a list of sites that the New York City Housing Preservation and Development department (HPD) announced in January 2015 that they were willing to sell to developers for $1 each. In the last days of 2015, after a year of organizing, the Mayor’s office announced that it was permanently preserved via a transfer to parks, with 14 other garden sites. Three months later, gardeners received an eviction notice; only one of the four public lots its on was transferred, with the rest still slated for private development. With continued advocacy, Green Valley finally won the fight at the end of last January to preserve the entire garden, including its greenhouse, via transfer to Parks for preservation (press release here)! Brownsville residents have been growing and selling food here for over 20 years.

Kim Anderson and Rodrigo Gonzalez, stewards of *Eldert Street Community Garden* (http://livinglotsnyc.org/lot/3034130063/)
Eldert Street near Knickerbocker in Bushwick, Brooklyn
This garden is in danger of disappearing. Some members of the non profit organization that owns the land sold it illegally for a lot of money. Gardeners are working with other members of the organization to reverse the sale and preserve the garden. We successfully organized to stop eviction and got the New York State Attorney General’s Office to investigate the suspicious transfer of the deed to the garden’s land. Litigation is on-going about the underlying title to the land; we’re returning to Brooklyn Supreme Court on Wednesday, March 15 at 9:30am.

Cindy Nibbelink, steward of *Project Harmony’s Joseph Daniel Wilson Memorial Garden* (https://livinglotsnyc.org/lot/58535/)
W 122nd Street near Adam Clayton Powell Jr. in West Harlem, Manhattan
This garden is in danger of shrinking: a private land-owner owns two of the four lots it’s on. The other two are owned by NYC Parks. The private landowner is attempting to evict the gardeners. It could be saved if the city uses eminent domain to buy the land from the private owner for the public good of preserving this vibrant community greenspace that neighbors created in 1985 on a vacant, rubble-strewn lot.

Gretta Belton-Bourjolly, Samuel Belton and Joan Belton, stewards of ~Merrick Marsden Neighborhood’s Association Community Garden~ (http://livinglotsnyc.org/lot/58581/)
118th Road and Merrick Boulevard, Jamaica, Queens
This garden is no longer in danger: serving the community since 1967, it was saved from tax lien foreclosure and transferred from the neighborhood association that owned it to the Brooklyn Queens Land Trust (BQLT) for permanent preservation as a community open space in January 2014. It took a combination of a local fundraising frenzy, legal defense by Mohen & Segal LLP (connected by 596 Acres) against a foreclosure action brought by the Tax Lien Trust (though property taxes never should have been owed by the nonprofit neighborhood association that owned the property in the first place, according to a NYS law), and finally, the transfer of the property to BQLT to secure it.

This session is part of the Just Food Conference: A Call to Collaboration on Sunday, March 12 and Monday, March 13. It will be offered twice, back-to-back, during the conference’s lunch period on Sunday: once from 12:55pm to 1:40pm, and again from 1:55pm to 2:40pm. Conference tickets start at $40/day (for students) and you can get one here. You can also volunteer to help with the conference for six hours and get the rest of that day’s admission for free by signing up here.