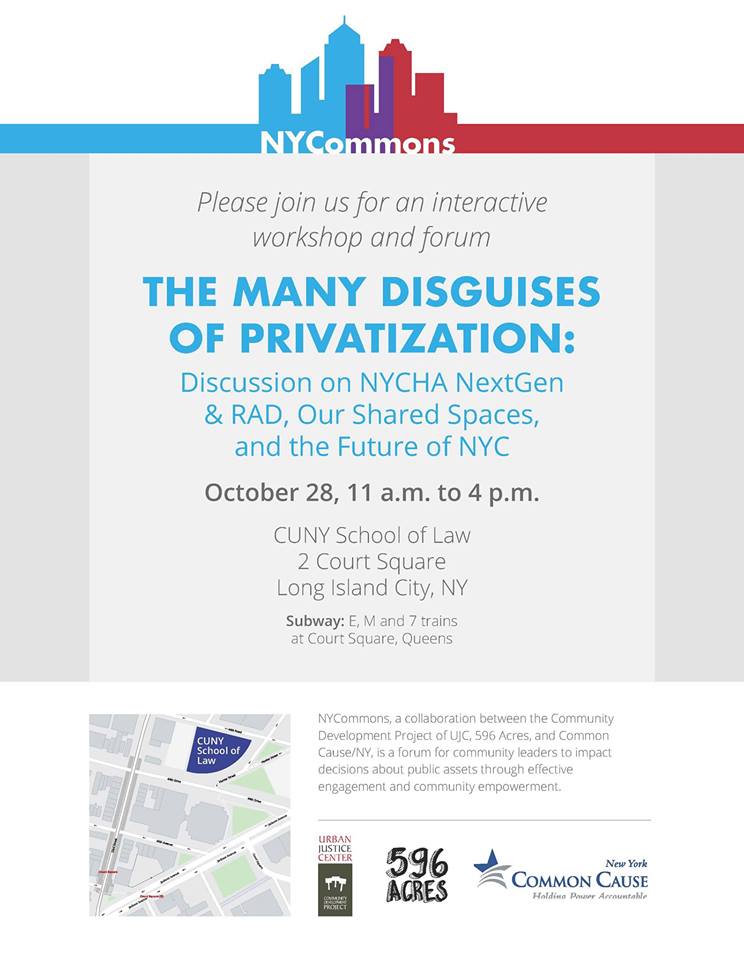 Facing overwhelming funding deficits, the New York City Housing Authority (NYCHA) has begun to transfer its properties to other ownership structures through programs such as the Rental Assistance Demonstration (RAD) and has agreed to allow private developers to add new buildings to existing NYCHA campuses via the NextGen program, the de Blasio administration’s version of infill. In the short-term, these programs are designed to bring money and renovations to NYCHA campuses that have been underfunded for decades. But inviting private investment into public housing is a major shift that will alter the rights and lives of hundreds of thousands of New Yorkers. Is the trade-off worth it?

This weekend marks the five-year anniversary of Hurricane Sandy: an event with a devastating impact on many NYCHA residents, caused by many past and present policy choices that have left NYCHA campuses vulnerable to disaster.

We invite public housing residents and advocates to join us for a citywide convening where NYCHA residents and the organizers who support them can come together to discuss the details of programs such as NextGen and RAD, hear from resident leaders in campuses impacted by these policies, and learn from Rasheedah Phillips, an attorney who has worked extensively on the privatization of Philadelphia’s public housing stock who will address the pitfalls individual tenants and communities should prepare for as thousands more units are removed from NYCHA’s ownership in the coming years. We will discuss major policy issues impacting NYCHA now, ways people can influence what’s happening, and alternative ways to envision NYCHA’s future. Participants will also be introduced to NYCommons.org, an interactive online tool where residents and organizers can access information about what’s happening on NYCHA campuses around the City and how they can get involved.

Please RSVP online here and please contact Elena Lunyova at elunyova@commoncause.org with any questions or to arrange Metrocards or a van pick-up for NYCHA residents.

This convening is a project of the NYCommons project, which helps New Yorkers impact decisions about public land and buildings in their neighborhoods. It is a collaboration between Common Cause/NY, the Community Development Project at the Urban Justice Center, and 596 Acres, Inc.

*Rasheedah Phillips is a Managing Attorney in the Housing Unit of Community Legal Services in Philadelphia. She represents low-income tenants facing eviction and other housing issues. Ms. Phillips is an expert in subsidized housing law and has successfully advocated for changes at the Philadelphia Housing Authority.