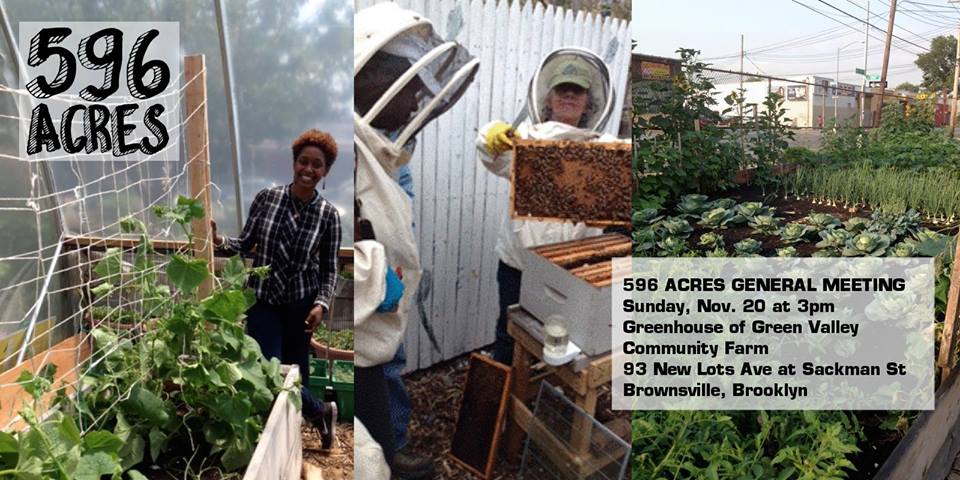 **We will focus on the impact of the Mayor’s Housing Plan on existing gardens and community land access.**

We are meeting at Green Valley Community Garden & Farmers Market (formerly Powell Street Block Association) in Brownsville, a garden that is in danger of disappearing.

Green Valley Farm in East New York was one of the sites that was announced as being permanently preserved at a meeting hosted by the Mayor’s office on December 30, 2015; it was announced that it would be transferred to NYC Parks. In a stunning twist after that announcement, the coordinators of Green Valley Community Farm learned last week that only a small portion of their site had actually been transferred. It seems that although the garden has been active on 5 tiny lots for nearly 20 years, HPD’s records only included one parcel as the “garden.”

In March, HPD told GreenThumb that they would like get a developer to build on the following lots:

Only Brooklyn block 3857, lot 1 was actually transferred to Parks. It is only 1,680 sq ft (21.67′ x 85.58’). The clear intention of the transfer was to preserve the farm but it seems that a scrivener’s error resulted in only 1/5 being actually preserved.

The situation of this crucial community space at risk of disappearing was covered in City Limits: http://citylimits.org/2016/10/11/no-rezoning-plan-but-city-eyes-brownsville-for-big-changes/

The whole story is worth reading if you care about the fate of the neighborhood, but here is the key part:

For the past few months, Brenda Duchene, the lead farmer of the Green Valley Community Garden on New Lots Avenue, has not been thinking about the potential for new local restaurants or improved street lighting. She’s been mourning that most of the farm, which is about twenty-years-old, could be demolished for housing.

Last December, thanks to the advocacy of organizations like 596 Acres, the farm was included among 34 gardens transferred from a list of developable properties to the Parks Department for permanent protection. In April, however, Duchene learned that only one of the five lots that constitute the garden had been transferred to Parks—leaving most of it still on HPD’s list of developable sites. Duchene went to the July planning initiative meeting to voice her complaint, but HPD did not offer to transfer the rest of the parcels. The agency, which says it must make tough decisions to strike a balance between preserving gardens and finding space for affordable housing, still expects the gardeners to move plants from the unlicensed area into the single lot.

Duchene says that will require the farmers to demolish a greenhouse, no longer invite schools to visit in the winter, remove their beans, plum and cherry trees, and ditch their aspirations for a year-long farmers market.

“You have vacant lots and you’re saying you want to do gardens on some of these lots, but why would you destroy a garden that’s already in existence? It makes no sense,” says Duchene.

Creating further alarm for the staff at 596 Acres, the entire garden, along with eight other community gardens that have been officially transferred to the Parks Department, were marked as “vacant” on the map issued by HPD as part of the Brownsville planning process, according to the organization’s director Paula Segal. Following inquiries by Segal and City Limits, HPD corrected the map and apologized for the error.